This page is dedicated to the one-and-only

If you were fortunate enough to know Father Bill, you’ve probably said something along these lines about him: “they broke the mold” or “there will never be another Father Bill” or “he was one of a kind” or “one of the blessings of my life was knowing Father Bill.”

The purpose of this page, and the “Share Your Memories…” page, is to celebrate and honor this special man.

William J. Hultberg, Jr. was special in so many ways – as a priest, as a counselor and educator, as a decorated serviceman, as a friend, and as a person in recovery. Father Bill was a rule-breaker and a revolutionary. He was a friend and mentor to the homeless and the famous; “old drunks” and “puppy drunks;” atheists, agnostics, and people of all belief systems; veterans, sex workers, clerics, doctors, cops and thieves. He believed in granting absolution to “his people,” whose acts may have been wrong, but whose addiction took away their free will.

Father Bill loved animals, Frank Sinatra, and Scrapple with ketchup. He took frequent trips to Florida to visit “street meetings,” which kept him abreast of trends and shored up his connection to the sick and suffering.

From 1984 to his retirement in 2015, Father Bill was called to serve as the Spiritual Advisor at Caron Treatment Center in Wernersville, PA as an addiction counselor, Director of Pastoral Care, and Assistant to the President. His Sunday chapel service at Chit Chat Auditorium became the heart of Caron’s treatment program. Father Bill ministered to patients, staff, Caron alums, family members and friends, offering spiritual and religious counseling and helping patients to understand the 12-Step spirituality of recovery. He developed and implemented a spiritual program of support for HIV-positive and AIDS patients and played an integral role in developing HIV retreats hosted by Caron.

With 35 years of service with the U.S. Army and Navy, Father Bill retired as a Lieutenant Colonel in 1991. As a Navy Chaplain, he served with the Marines in the Vietnam War, where he received the Bronze Star Medal with “Combat V” for valor. As an active duty Chaplain with the U.S. Army, he also received four Meritorious Service Medals for his work in developing and implementing alcohol and drug prevention programs.

Father Bill was devoted to his order of 61 years, the Oblates of St. Francis de Sales. He was also faithful to his Wilmington friends and family, his fellow Salesianum School alums, and the U.S. Army, Army Reserves, Navy and Marines.

It is impossible to fathom the number of people who have been fortunate to cross paths with Father Bill in his 88 years on Earth. For all of us who have been so blessed, we know that our lives have been enriched, our recovery has been strengthened, and we will carry his love with us for the rest of our lives.

We love you, Father Bill!

Help us to remember Father Bill

Lord God, I acknowledge you as my Savior and Redeemer.
I ask you to come into my life.
Send the power of the Holy Spirit upon me, to enlighten my mind and will as to what I must do… and then move my will to do it!
I ask the Holy Spirit to heal me of all obsessions and compulsions to use alcohol and other drugs or relationships or behaviors addictively.
Grant that I may never separate myself from you again, for you are my Lord and God.
Amen.

“Good morning, everyone. I’m Father Bill, a very grateful recovering alcoholic and powerless over a lot of things.”

On being disconnected:  “Once the disease of addiction has been diagnosed, we are disconnected — it’s like pulling the plug out of the wall. Addiction is a soul sickness. It rips our souls right out of our bodies and takes away from us what makes us human, and the capacity to have intimate, lasting relationships. It disconnects us from every relationship we have — with ourselves, the universe and God. The 12 Step process gives us back what the addiction took – Our souls – The capacity to love and be loved.”

On how the Caron Chapel music program began:  “A former Caron patient was Joey Kramer, the drummer form Aerosmith. (Father Bill always mentioned that he had Joey’s permission to break his anonymity.) One time Joey called to say that they were playing at the Spectrum and he wanted me to come. I said, ‘I don’t even like your music, Joey! I’m a Sinatra guy.’ But Joey insisted and said he’d send a car for me. I remembered that my program tells me to ‘keep an open mind,’ so I agreed to go. They gave me VIP treatment and put me on the sound board. When the band started to play, I saw thirty thousand freaky kids completely in synch with the music. That was when I realized we were losing these kids, and that music would help them to connect. We told our young patients that they could play their music in Chapel, and that there were two requirements:  it had to be spiritual in nature, and it needed to have a recovery message. The first two songs ever played at Caron Chapel were ‘Brothers and Sisters’ and ‘Touch of Grey’ by the Grateful Dead. You can’t get much more spiritual than that.” 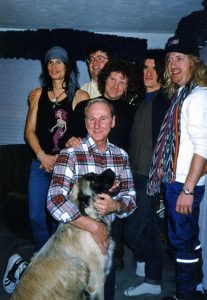 “In the name of God, we’re killing each other. There isn’t a single war that isn’t religious. Why can’t we see the goodness in one another’s belief systems? Rather than seeing the things that divide us, we see the things the unite us, and we shall survive.”

“I believe in giving my people absolution. In your addiction, you were too sick to sin. We’re going to get you well enough so that you’re capable of it.”  😉

“You don’t need forgiveness. That will always be there. What you need is healing.”

“Love and tolerance is our new attitude. We don’t tolerate intolerance or putting anybody down or name calling. We’ll take you just as you are.“

“To love and to be loved is the greatest single gift”

On service:  “If you want to keep your recovery, you’ve got to give it away. Love wasn’t put in our hearts to stay, for love isn’t love until you give it away.”

On his experience in Vietnam:  “I was commissioned as a Lieutenant JG in the Naval Reserve Chaplin Corps. My first tour was in Guantanamo Bay, and my second tour was in Vietnam — the 2nd Battalion, 5th Marines. If any of you ever saw the movie Full Metal Jacket, I picked that battalion up after that battle and we took it south. I saw nothing compared to what that grunt experienced. I saw just enough to screw me up.

“And when I came back, I was a mess. We knew nothing then about PTSD back then. My drug pusher was a navy doctor with a prescription pad. They didn’t tell me not to drink on top of that, and it was like an explosion went off. Within a year I was hitting bottom and resigned my Navy commission and went back into the order. Within a year of that, I was in the parking lot of Chit Chat (now Caron). I remember, it was July 4, 2973, and I said to myself, ‘How in the name of God did I ever end up in a place like this?’ I felt I was a disgrace to the priesthood.

“I remember sitting in a group room, and someone asked John Flannery (Chit Chat’s Director at the time), ‘How do you get us drunks sober?’ Without batting an eyelash, Flannery said, ‘We’ll love you until you’re capable of loving yourself.’ And they were the words I needed to hear.” 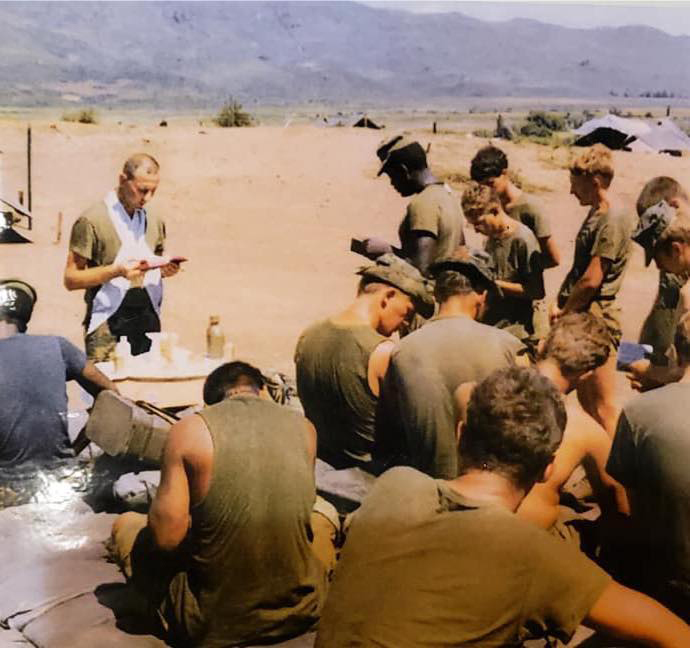 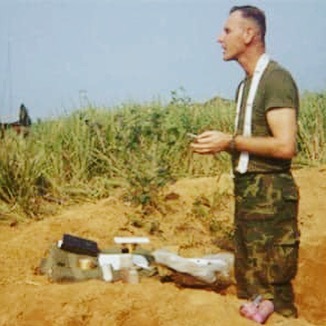 “There is no other disease where misinformation, or a lack of it, will kill you.”

“A sorrow shared is halved. A joy shared is doubled.”

“Recovery is an inside job.”

“I’ve got the disease that keeps telling me I haven’t got it.”

“What are they going to do? Shave my head and send me back to the monastery?”

“Go to the people who are winners and pick their brains.”

“What we need are intimate, lasting relationships.”

“An untreated addict is not capable of loving or being loved.”

“Recovery works for those who work it.”

“We’ll love you until you’re capable of loving yourself.”

Click on any image to view in gallery format.

If you have photos that you’d like us to include, please send an email to kim@conversation.zone

Feedback
Feedback
How would you rate your experience?
1
Bad!
2
Poor!
3
Fair!
4
Good!
5
Great!
Do you have any additional comment?
Next
Enter your email in order to submit your feedback.
Back
Submit
Thank you for submitting your feedback!
Go to Top